While it may be an inconvenience to find the toilet seat wet most of the time, it is nice to have reading material close by such as Marvin K. Mooney or books to help me with the alphabet. 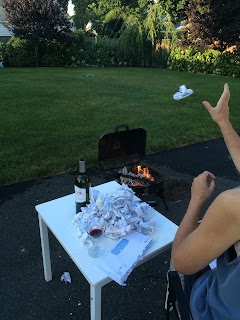 As is our annual tradition - we burn the 6 year old* statements/tax returns etc.
My off-the-grid-wife insists on receiving paper statements. I am not sure why - tho it may just be so we can burn them once a year.

We used to have a wood stove at the old house, and you can burn anything in those.
This new house has a gas fireplace. Which I love for its cleanliness and push button convenience - but burning in there is a huge no-no.
Thus the outdoor fire. In a camp stove no less, as we no longer even have a firepit.
We turned this years burning into a weeny-roast - so its an environmental win/win, as well as being delicious.

What's that saying - you can't swing a cat without hitting somebody with Lyme.
Add me to the list.
But please don't hit me with a cat, I've got enough going on.
Holy crap - what a tick can do.
Crazy that our natural predators are the size of "."

In May I had some sort of bite or some such thing on my shoulder. I thought it was a pimple.  Oops.
So this thing got infected pretty fast, causing a rather large red rash over my entire shoulder area, and I felt pretty crappy. I even had the rigors one night. Have you ever had rigors? That is some crazy shit.

Blood tests at that time revealed a bacterial blood infection - so I was dosed up with antibiotics. These didn't kick in fast enough, which landed me in the ER to get IV antibiotics. Several doctors saw this rash. No doctor mentioned Lyme or even tested me for it at that time.

So I got 3 weeks on Doxycycline and Keflex. These two drugs are a great summer combo. With Doxy you can't go out in the sun - for me...not at ALL. I became super photo-sensitive. And with the Keflex you can't have alcohol.
This was perfect... I had to stay inside, and not drink ... and I live at the beach.
Good times.

After I got past that and the days went on I started to feel, achy and tired and sweaty and bloated and swollen and generally crappy.
I thought it was ..."THE Menopause".
But I was in alot of pain and had tremendous stiffness. It started to get harder to get out of a chair, I had trouble walking, the pain kept me up at night.
I thought - hey, if this is menopause women would not make it to old age - this is just too hard. So I went to my primary and to my Gyn and pleaded with them to make it stop.

That's when we found the Lyme. That was 4 weeks ago.
While I have had improvement - today I am having a change up in my meds as symptoms are returning.
Lyme is not something to trifle with, even when you find it early.

For the love of data

I was trying to remember something last week and ended up using this blog to figure out when something had happened. It's wonderful to have this searchable record to look back on.
It then occurred to me then that my laissez faire attitude for blogging has caused me to miss the last couple years of ...
THIS 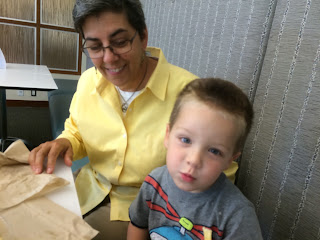 I plan to rectify this.

What have we become.

I actually heard myself say this morning...
"I have switched from wine to beer this week to see ...who really cares..."

So this is it. This is what we do now.
We deny ourselves foods that are perceived as bad. We cut out dairy, or wheat, or carbs, or chocolate or meat or eggs or heroin.
Then we track our steps. How many steps to the car, to the ladies room? If I drink alot of water I will pee more -- more steps!

I am looking forward to retirement. When I won't have to care. I can check out.
Tho its no longer acceptable to look forward to something - because then I am not being 'present'.

Traffic was the usual stop and go crawl this morning. It was chilly out, despite having had a nice, sunny, melty day yesterday. As I rolled along in the center lane, creeping slightly faster than the right, I came upon a car with the drivers window down.

This is unusual tho not unheard of. I generally expect to see a smoker behind the wheel, or perhaps an old, crusty contractor (not sure why those guys are always so warm).
But this was a woman. As I drew closer I could see she was about my age.
I looked over as I passed  - we shared an almost imperceptible knowing glance.
Because of course I understood.
I had just shut my window.
Posted by weese at 3/10/2015 04:56:00 PM 3 comments:

It was 9 degrees this morning.
I do not say that like its remarkable in any way.
It's not.
It's often 9 degrees.
While my car was warming up I shoveled a thin layer of snow off the driveway, tidied up some edges...
My coat was open, I wore no hat. The remaining dampness in my hair froze.
I was un-phased.

Acceptance?
Denial?
Does it matter?

Does anyone talk about anything else anymore

excerpt from an email to my neighbor across the street:

I have gone into a deep, deep state of denial. My usual “weekday wine abstinence’ has fallen by the wayside.Even in less disastrous years I am not a big fan of the whole spring melt-down.Compound that with continually adding to the overall generous amount of snow already on the ground – and I am really starting to think about taking up a whiskey habit.

Maxine is right. I believe she may always be right.

No Maxine, I am not done yet

It has been brought to my attention that it has been 363 days since my last blog post.

Had that been my last menstrual cycle, I could officially consider myself in menopause.
Alas, I am not that lucky.

So no.
The blog is not over.
It ain't over 'till I say its over.
I may never say that.
Never say never.
You can't win if you don't play.