While you're waiting for spring - its a good time to move stuff around and vacuum. Remember to remove the grill on your fridge and vacuum the coils. Also with all these heavy winter clothes and so much of that fleece -- your dryer vent and pipe could also use a nice dusting out.

Remember to dig out any exterior vents when the snow starts to pile up.

Here we dug out our dryer vent - which is vented very low (eek... not to code) out of a basement window. 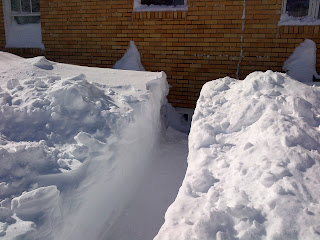 But more important than this - be VERY sure your furnace vents are free and clear. And always make sure your CO detector is working.

Oh... and also remember cars buried in the snow will have their mufflers blocked. Do not sit in a running car with the muffler blocked.

Nemo (or whatever it was called...)

We moved to our little house by the marsh to get away from all the snow inland.
ha.

Luckily - at the last minute and at the urging of our mover (of all people) I had decided to bring the giant snowthrower with us, rather than just leave it at the old house.
whew.


Friday the snow started during the day, and I cleared the driveway twice that day in anticipation of alot of snow overnight. 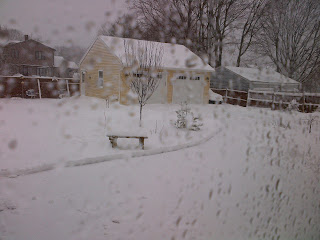 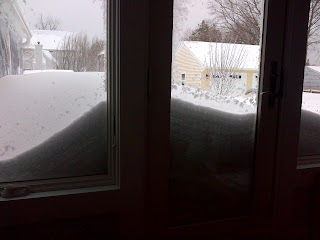 We started to clear first thing in the morning.
I did learn that with high winds - pre-clearing the driveway can be pointless.
Luckily in some areas there was only about 2 feet - the snowthrower went through this easily.

But the wind was brutal.  If you've ever tried to use a snow thrower in high wind - you know what that's like. So after some hand shoveling we gave up for the day.

Sunday was bright and sunny.
We assessed where we had left off from the day before.
hmm. 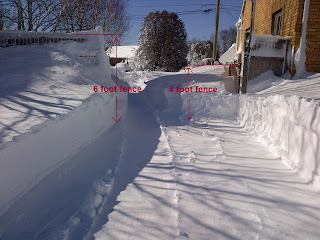 Found one of the cars. 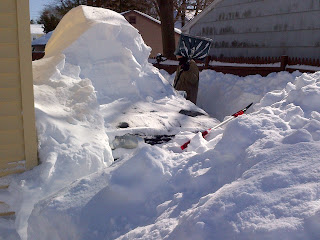 We eventually got the driveway cleared by knocking the snow down with shovels then running the snowthrower through at a snails pace. 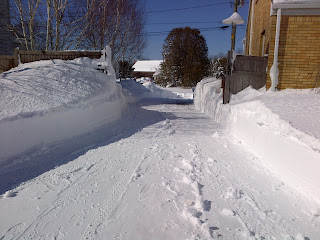 But we sorta dead-ended at the street - two days in and no plows yet.


So - we passed some time.
My clever-wife got the idea to dig our way out to the road.
Luckily help was on the way.
She wasn't out there long by herself, and by evening a full car width path was opened up for the entire block.
Monday a payloader arrived! 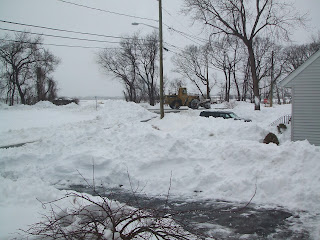 The plows were by later to tidy up. 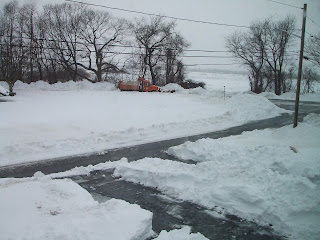 And on Tuesday - we finally got that snow bank backed off the driveway.
﻿
﻿

What did I say yesterday... about clearing snow off the edge of the driveway?

When clearing snow off the driveway and walk be sure to clear it all the way to the edge of the pavement and then even in a few inches into the lawn or garden, especially with these large snowfalls.
This way as the snow melts it seeps into the ground and doesn't puddle up on your pavement and refreeze causing dangerous slippery spots for weeks to come.

Also if you use a snow thrower - remember to keep spare shear bolts on hand. Because when you run over the NYTimes buried at the end of the driveway - the shear bolt will snap for sure.*


*i am waiting in great (evil) anticipation - as i watched my neighbors paper slowely get lost in the snow.
there will be plenty of posts to come on why i would wish such an annoyance on one of my neighbors.

Have you had the opportunity to catch the norovirus this winter.
Whew.

It seems to be going around our family this week.
We suspect this may be the culprit... 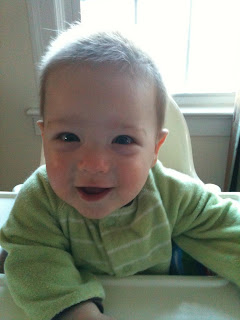 This virus is highly contagious. Therefore, today as soon as I could stand up without assistance - the disinfecting began.
Smells like the YMCA in here, but we'll be safe now (shallow breaths are best).

A couple days a week I actually go to an office building to work (vs. toddling down the stairs to my cozy home office in the basement) We moved into this building only about 2 years ago and at that time it was completely remodeled. The existing building was gutted and redesigned with environmental friendliness at the forefront. In fact we are one of few corporate headquarters which is LEED certified.

All around the building you can see evidence of our keen recycling efforts, smart energy use and low flow water control. This makes me happy.
In the restrooms for example everything is run on sensors -- the toilets, the water, the lights.
To dry our hands we have two options. Old school paper towels, and a high speed electric hand dryer.
I have always vacillated.
What to do, what to do?
Which method truly has the smaller environmental footprint?
I've read supporters of each method - tho honestly my research has been limited.
As I wallow in my indecision I alternate drying methods on each visit.
This way I figure it's an environmental draw.

At home last night as we were preparing dinner (which means my adorable-retired-wife is preparing food while I mill about) a story came on the radio.
We listen to the radio frequently now.  Yet another wonderful free thing we have rediscovered - since we've let go of the cable monster.

The story profiled a small company that made hand dryers. This company had been struggling and reinvented itself into success. It was a heartwarming story and the turn around saved the jobs of the small dedicated and rather hands on production staff.
I was sold.
I've been using the Ex celartor all day.
This makes me happy.
Posted by weese at 2/05/2013 03:19:00 PM 1 comment:

there is always an up side


Once in awhile I'll lament to my ever-so-patient wife that perhaps we should have waited till a house closer to the water came on the market.
You know...one of those little diamonds in the rough with stunning views of the sound.

Yesterday the FREE dog and I walked down to the seawall. It's about 3 blocks. She's getting on in years and thats about her limit now.
I suddenly realized that if we lived any closer to the water I wouldn't get any exercise at all.
My goodness if we lived waterfront I would probably die of inertia.

It has come to my attention that since I stopped tip-o-day o so long ago that the world has gone to hell in a hand basket.

Ok so we'll start with something easy.
It's clean sheet friday.
Do you have a day of the week to wash your sheets?
You should.
I will tell you why. If you don't do it on a particular day of the week - then when would you?
When they 'need' it. Thats ridiculous. How would you know.
If you walk into your bedroom and it smells of sleep - then you've waited too long.
If you have a day of the week - there is no guessing. There is no hassle.
I like fridays because then I have my freshest sheets over the weekend. This is a treat for me.

Treat your bedroom as your sanctuary. It should smell fresh, and be tidy and well dusted. This is a place you come for complete rest and relaxation.
You cannot rest in chaos.